This park, Dolina Ros (Valley of Roses), is on Castle Hill by the shore of the Kremenchuk reservoir. This offers a magnificent view. In 'Valley of Roses' are several ponds with fountains set at the heart. From the park hot air balloons lift off during the air show. Also, visitors can sunbath on the beach by the river Dnieper, which is adjacent to the park. The city authorities are developing a project, to turn 'Valley of Roses' into 'Singing field': the park will be the venue for choral festivals and vocal concerts. (http://cherkassy.glo.ua)

Park of the 50th anniversary of October

This park is a monument of landscape architecture, founded in 1967. It is located on the banks of the Dnieper River on a territory of 49 hectares. There is a system of ponds from which water cascades down to the Dnieper.

The central element is a pond with a statue of a mermaid. In the park are over 70 species of exotic trees. You can see scenic views of the Dnieper from the 'Bridge of Love' constructed over the ravine. (ukrainetrek.com)

For the 30th anniversary of World War II, Victory Park was built in Cherkassy, remembering the Soviet Union's victory over Nazi Germany. Several monuments in the park are dedicated to the soldiers of the 254 Infantry Division, who liberated Cherkassy from the German occupation in 1943. Another monument is the airplane Su-17, dedicated to the feat of the 8th Guard Bomber Division. The terrain of the park is a combination of shady alleys with a cascade of ponds. On the territory there are several attractions for children. (Source: http://www.doroga.ua) 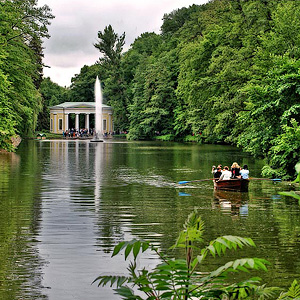 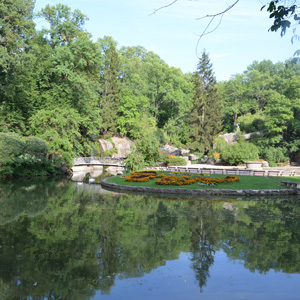 For the intent of its creators, Sofiyivka park (or Dendra Park) is the embodied illustration of the Homeric poems 'The Iliad' and 'Odyssey', where each composition or small architectural form contains a certain plan, that expresses a myth or some event.

Sophia Park was founded in 1796 by Stanislaw Potocki, a Polish magnate and owner of the town of Uman in that period. Why Saint Sophia? The park was named after Stanislavs wife, Sophia Witt-Potocki, because it was a gift for her birthday that he presented to her at her birthday party in May 1802. If someone wants to see the sights of Ukraine, the park in Uman is a must. It is one of the most beautiful places.

Polish military engineer Ludwig Metzel was appointed as contractor and construction manager of the topographical and architectural design of the park. All the work was done directly in front of the fortress of Uman. The park was created in an terrain almost without any trees and is divided by the river Kamenka, that cut gullies and canyons into the granite. The river often reappears at the surface. When creating the park skillfully, he used the relief. In the process of completing the work, some areas were planted with local and exotic trees and shrubs. At the same time the first architectural structures were built and decorations were created in the form of sculptures, mostly antique. 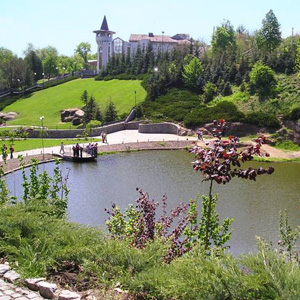 Using different tree species, combined with ponds, rocks and architectural structures, Metzel created views and perspectives of different plans (Home Alley, English Park, Champs Elysees and others). The main composition of the park runs along the bed of the Kamenka: a number of separate pools and ponds. In the upper part are more than 8 hectares of ponds and in the lower part about 1.5 ha, all connected with waterfalls (one of them 14 meters high), gateways, and the underground Acheron river (length 224 m).