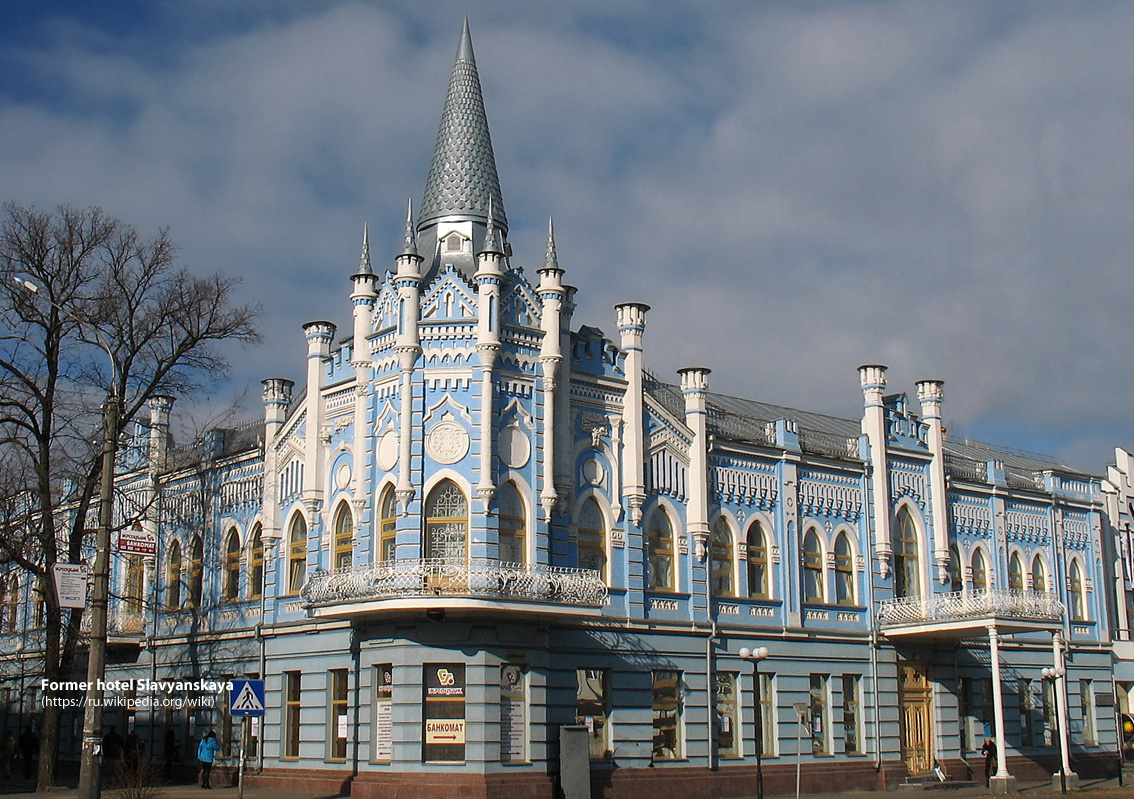 City
History
Museums
Churches
Sites
Parks
Theatres
Festivals
Cherkasy or Cherkassy (Ukrainian: Черка́си, Russian: Черкассы) is a city with a population of about 300,000 people in central Ukraine on the east bank of the Dnieper river (Kremenchuk Reservoir), roughly 200 km south of Kiev. It is the capital of the Cherkasy Oblast (province), as well as the administrative, cultural, educational and industrial center. It is also the Central Economical Region of Ukraine. The city is divided into 2 boroughs (raions): Sosnivskiy (with Orshanets village) and Pridniprovskiy. The region was the motherland of Cossack movement, the hetman capital Chigirin lies in Cherkasy Oblast. Cherkasy is not to be confused with Cherkassk, which is on the Don River to the east. 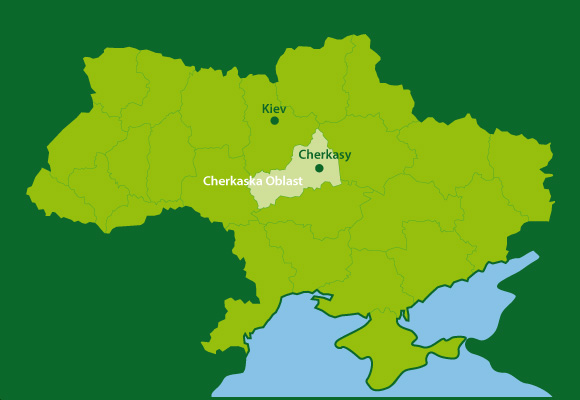 The region of Cherkasy was inhabited by people more than 40,000 years ago. 3,000 years ago, the land was inhabited by Scythians who built burial mounds, which are still preserved until the present. The Scythian burial mounds are located in Zolotonosha area. In 800-900 AD, this land became part of Kievan Rus. This is due to the union of Finno-Ugric and East-Slavic peoples under the rule of the Rurik dynasty. From the 14th until the early 17th century the residents of Cherkasy were faced with the Tatar-Mongol invasion, had to protect themselves against the Polish nobility, fight off the Turkish-Tatar yoke of oppression and fight against Lithuanian feudal lords.

Current day Cherkasy is one of the main industrial centers in the country, with light industry, chemical industry, engineering and food industry. In June 2011, the city celebrated its 725th anniversary. It is a big cultural center. Several theaters, philharmonic, 3 movie theaters, numerous museums and clubs are serving the city. The city has 3 indoor skating rinks. People can relax in big parks and gardens around the city, they can also visit city's zoo. Cherkasy is among the cities in Ukraine that have their own planetarium. (ck.ck.ua - Wikipedia)

Cherkasy region was founded on the 7 of January 1954 and is one of the youngest Ukraine’s regions - or Oblasts. The oblast, with a population of 1,5 million, is situated in the center of Ukraine. The oblast consists of 20 districts or municipalities. In the region more than 100 settlements of the 'Tripilye' culture were found, and about 100 Scythian villages and burial sites.

Prominent figures were born in the Cherkasy region, like the first Ukraine’s hetman Bogdan Khmelnitskiy, the heroes of the National Liberation War Peter Doroshenko and Ivan Vygovskiy, Gaidamak movement leaders Zaliznyak and Gonta, and the world-known genius Taras Shevchenko.

Cherkasy region is known not only for its history, but also for the current day well-developed industry. About a third of the gross national product is produced here with agriculture and chemical, processing and food processing industries. 45 interbranch organizations make up the Cherkasy regional organization of trade unions.

The region consists of forest-steppes with plains and hills. The soil is mainly black. The climate is temporally continental, with soft winters and warm summers. The average temperature in summer is +20˚C and in winter -5˚C. Because of the climate, the region has a beautiful forests and many different sorts of fauna. The largest bio-geographical reserve in the forest-steppe zone is located in Kaniv, covering 2028 ha. Also the dendrologic park 'Sofievka' in Uman is a pearl of a garden. In 1996 it celebrated its 200th anniversary.

There are 1037 rivers in the region. The largest is of course the Dnieper river, that runs along 150 km through the Cherkast Oblast. If that is not enough water, the Cherkasy region also has more than 2,300 lakes and reservoirs. The length of Kremenchug reservoir is 130 km.

Cherkasy region has a large stock of decorative and building stones. Large deposits of granite are Starobabanske and Tanske. In the region is also the largest deposit of bentonite clay in Ukraine. Also kaolin, brown coal, peat and bauxite are found here. On the border of Cherkasy and Kirovograd is the Boltysk deposit of oil-shales. The left bank part has a source of mineral waters, like 'Mirgorodska'.

There are 932 religious organizations of 48 different confessions, persuasions and directions in the Cherkasy region. They consist of 7 regional religious departments, 4 cloisters, 4 spiritual missions, 1 brotherhood, 1 biblical institute (tuition by correspondence) and 913 religious societies, among which 582 are orthodox, 317 protestant and, 33 others.

Religious societies have Sunday schools. About 600 priests work in religious societies. Ukrainian Orthodox Church is the most numerous in the region, under its jurisdiction there are 443 religious societies. From the beginning of Ukraine’s independence by the expense of citizens’ contribution, active help of local authorities 162 religious institutions are built and 55 are in the process of construction.

In the region there is a wide variety of cultural institutions. That is the regional musical-dramatic theatre of T. Shevchenko, the regional puppet theatre, the regional philharmonic society, the Kaniv cultural school, the Uman musical school of P. Demutskiy, the Cherkasy musical cultural school of S.Gulak-Artemovskiy, 40 schools of esthetic upbringing, 738 houses of culture and clubs, 766 libraries and 2 national and 5 state historical-cultural nature reserves, where there are 17 museums, 14 museums of municipal ownership and 288 museums and museum rooms on society basis.

Cherkasy region is and was the historical-cultural center of Ukraine. It became the heir of spiritual heritage of people’s genius T.G. Shevchenko, who was born in picturesque village of Moryntsi (Zvenigorodskiy district) and was buried on Chernecha Mountain in Kaniv. Shevchenko’s land is famous for significant historical events. This land gave birth to Cossacks and democratic republic of Zaporozhska Sich. Here was the great National Liberation War of the Ukrainian people, led by Bogdan Khmelnitskiy.

From the Cherkasy Oblast, great writers, artists and scientists as I. Nechuy-Levitskiy, M. Dry-Khmara, T. Osmachka, M. Maximovich, A. Krimskiy, P. Yurkevich, V. Avramenko, I. Padalka, and many others contributed to global culture. The unique nature of the land and folk traditions were an inspiration to O. Pushkin, P. Chaikovskiy, M. Lysenko, M. Vovchok, M. Gogol, I. Kotlyarevskiy, G. Skovoroda and A. Mitskevich.

The participation of all bodies of political processes in following the Constitutional laws, social society agreement, protection of person’s rights are going on in Ukraine. 80 regional organizations, political parties, 461 social organizations and charity fund are registered and are active in the region.

The region is industrial-agricultural. The production of commodities and services makes up 42%. The industrial manufacture of the region is characterized by the following indexes:

Food processing (39,9%) and chemical (26,9%) industries prevail in the industrial manufacturing. The construction of machines and metal manufacturing make up 8%, light industry – 1,5%.

There are more than 300 industrial enterprises in Cherkasy region, that produce energy, mineral fertilizers, ammonia, chemical fibers, automatic and calculative equipment, technological equipment for processing branches, machinery and equipment for stock-breeding and fodder, and consumer goods. In the food processing industry the most developed are the following branches: sugar, meat processing, dairy, flour, liqueur-vodka, canning.

- Railway and auto transport
The territory of Cherkasy region is crossed by a great number of railways and motor highways. The railroads connect the south and north of Ukraine, the basic highways east and west.

The railway transportation in the region is provided by the enterprises and organizations of the Shevchenko railway department. The main office is located on the cross-roads of 2 directions: Moscow – Odessa, and Donbas – the Carpathians. The length of state, regional and local roads is 6,2 thousand km.

- Air transport
The Cherkasy airport can accept planes with a cargo capacity up to 40 tonnes. It can be regularly used by the domestic airlines of Ukraine. The length of the landing strip is 2,5 km.

- River transport
Cargo can be transported via the Dnieper river. In the Cherkasy region are the Cherkasy river port and three piers in Kaniv, Irkliev and Adamivka.

Generally the regional banking system has 44 balance establishments and 593 branches. The regional bank establishments practice in giving credits to the real economic sector. From the total amount of credits invested in the region’s economy, about 40% are given for the industrial sector, trade, small and middle business – 40%,agrarian and industrial complex about 20%.

13 bank institutions work with plastic cards. The stability of the currency market is provided in the region. The exchange transactions 34 points and 181 operational cash departments of the authorized banks.

Cherkasy Oblast is proud of its sports history. Among famous sportsmen are A. Himich (canoe), O. Motuzenko (kayak) and O. Krikun (light athletics).

Cherkasy sportsmen are among winners of championships, the cup tournament in fencing, European and world championships in sambo, the cup of Europe in kickboxing, sport gymnastics, international competitions in academic fencing, championship in fire-applied sport.

The system of health protection in the region includes 259 medical-prophylactic institutions of all kinds, where 4467 doctors and 12765 nurses work. The central hospital, with its highly qualified specialists, provides specialized medical help for the population. Since long, the hospital successfully cooperates with the Oxford child clinic within the program 'The help to children with inherent jaw-face defects'.

In the regional oncology clinic the open oncology-mamological center for children is founded. Here leukemia is researched, together with the corresponding center in Germany. In the framework of a USA project the problems of leukemia among the adult population are researched.

The regional oncology clinic cooperates with Ukrainian NSRI (named after M.D.Strazheska), the cooperation with French colleagues is in the process of developing the educational-diagnostic center dealing with the questions of echo cardiology, organized together with the European program of partnership TACIS.

In Cherkasy region are 688 agricultural businesses and 1011 farms. The total area of agricultural fields is 1,5 million ha. (3,5% of Ukraine), including arable land (1,3 million ha.). Plant-growing comprises 62%, stock-breeding 38%. The number of heads in stock-breeding is: cattle 388,500; pigs 610,500; poultry 6,6 million. The gross national product in the agriculture is 2,9 billion hryvnias, that makes 5% of the total Ukraine’s agricultural production, or 2055 grivnas per person.