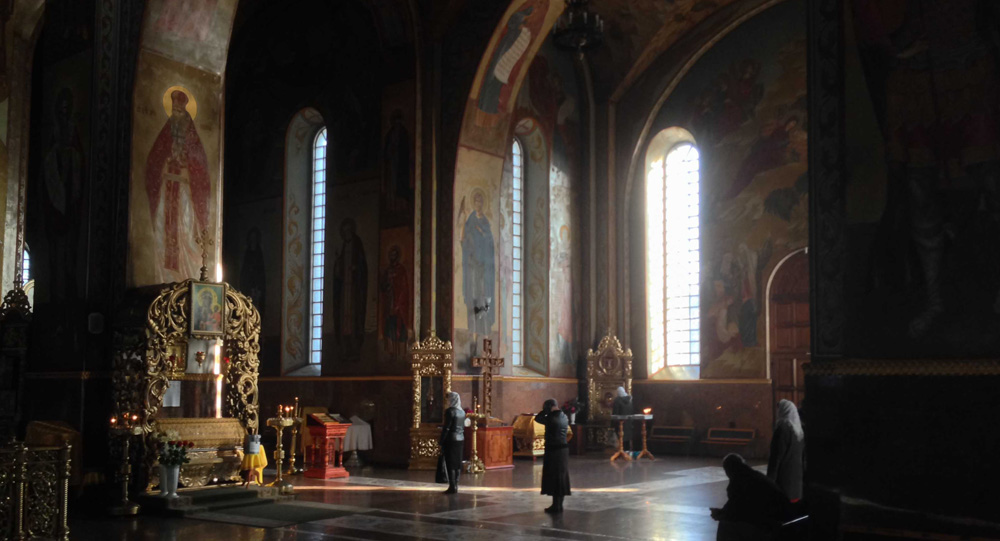 Church ‘Nativity of St. John the Baptist and All Saints’ 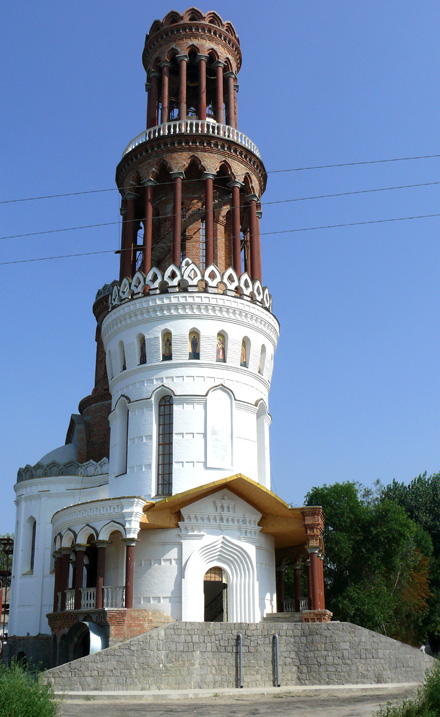 This church with its two altars, dating from 1998, is built on the outskirts of Cherkassy in the village of Hutora. It stands 54 m tall, including the cross at its peak. Worked into the architecture and on the ceiling you can find a number of crosses. This because this church is named after John the Baptist. The front of the church is richly decorated with porches, arches and ornate carvings. In the bell tower hang two large bells, that have survived World War II. Though they are slightly damaged by German bullets, the bells still ring clearly.

An interesting fact is that in the church - or rather under the church - there are secret passages and secluded underground cells. Of course, these passages are not accessible for the general public, but for pilgrims and monks they are. The church is undergoing restorations and finishing works, so it becomes more and more beautiful every day. You can climb the spiral staircase to the bell tower and an observation platform will offer a magnificent view the surroundings and of the city of Cherkassy. (www.votpusk.ru)

Church of Saints Peter and Paul 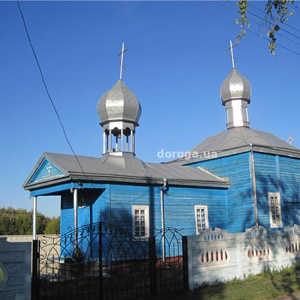 The wooden church of Saints Peter and Paul was founded by order of the Chamber of State Property in 1860 and was finished in 1863. For a long time the church was inoperative, but it was revived in the 1990s. At the same time, the church's three small baths, that were damaged in the Soviet era, were restored. The improvised bell tower is a scrap pipe hanging on a crane girder. (cherkassy.glo.ua) 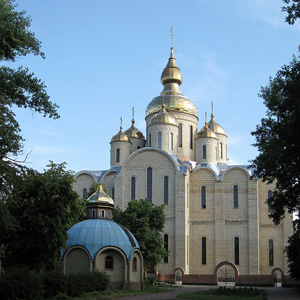 The tallest church in Ukraine (up to 72 m in height) was constructed in 8 years in the Byzantine style. It was a project of the Archbishop of Cherkassy and Kanev Sophronia. It can accommodate up to 12 thousand people. (www.doroga.ua) 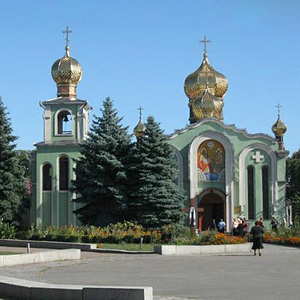 At the beginning of 1671, the Holy Trinity Church was rebuilt. It took almost a hundred years to reconstruct the old church. In 1963 on the orders of the Archbishop, a stone building was erected in the place of the wooden structures on the Hill of Glory.

During the 1960s, the Holy Trinity Church was to be demolished, because of the construction of a grand memorial monument on the Hill of Glory. In 1991, the city council decided to restore the Diocese of Cherkassy Holy Trinity Cathedral, and now it is a tourist attraction in Cherkassy.

They built the cathedral next to the Castle Hill, on the territory where once stood the main Orthodox church in Cherkassy. Majestic Holy Trinity Cathedral is open for visiting pilgrims, worshipers and tourists every day from eight in the morning until seven o'clock in the evening. Services are held every Wednesday, Saturday and Sunday. Just performed service in the days of religious holidays. (wikimapia.org)

Church of the Blessed Virgin Mary in Kaniv 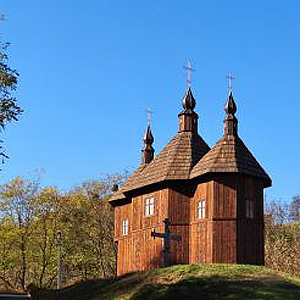 This church is located in Kaniv, Cherkassy region. It is located on the Tarasova mountain. According to legends, Taras Shevchenko wanted to settle here, but it never happened. After his death, the poet`s remains were buried on the highest peak.

The church was made of wood in the 16th century. It became the spiritual center of the Pokrovsky Orthodox church. It was the sanctuary than once was destroyed by the Tatars and later was restored by order of Ivan Mazepa. Its recovery was illustrated by the famous French artist Jean-Henri Muntz. 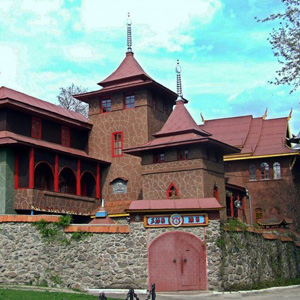 Europe's largest Buddhist temple ‘White Lotus’ in Cherkassy was founded in 1988. It was built by the students of kung fu ‘Sha-Fut-Fan’ school and mirrors the Buddhist temple in Laos. The chairman of Cherkasy, B. Skubaev, designed the temple . According to legend, during the construction of the foundations, they found and old stone, out of which a mask of a Buddhist warrior was carved. At the entrance are two figures of warriors, brought from Tibet. In the ritual hall the floor is carpeted and the walls are decorated with wood and velvet. Followers of Buddhism study Thai boxing and kung fu here. On Sundays in the ‘White Lotus’ there are guided tours with tea ceremonies. It is also possible to have your wedding ceremony here. (www.doroga.ua) 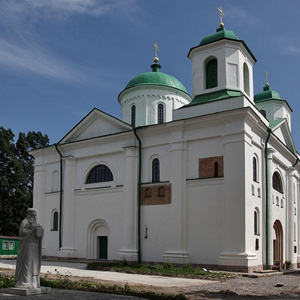 The chronicled history of the city begins with 1144, when Prince Vsevolod erected St. George's Church. In 1240, it was destroyed by the Tatar-Mongol troops. Cossacks did their best to restore the church. Traditionally Cossacks came to Kaniv to live out their days. Over time, the cathedral formed a monastery, which in the XVI century became a Cossack shrine.

In autumn of 1678, Kaniv was plundered by the Turks and the monastery and the church were burned. In 1803-1805, the cathedral and monastery were restored by Basilian monks. Two western towers were added and semicircular windows were built over the portals.

The architecture of the Assumption Cathedral repeats the type of Kiev-Pechersk Lavra. Unfortunately, time had taking its toll on the interior paintings. Paintings that still exist today are an attempt to restore the former look of the cathedral. But however that may be, the Assumption Cathedral is one of the spiritual centers of the Ukrainian Cossacks, which is worth visiting in order to get to know Ukraine better and feel the life and history of the country. (ua-travelling.com)

Temple of Saint Nicholas in Tuboltsy 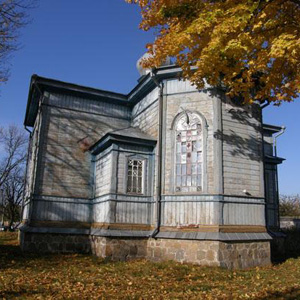 Built in 1834 by Prince Mikhail Vorontsov, the wooden church still stands in the town of Tuboltsy. Initially the temple was to be consecrated as Pokrovsky, but because construction was funded by the church of St. Nicholas, the temple was also dedicated to this saint. Inside the church was a reading club, and later it housed a rural radio station. During the period of Soviet anti-religious madness, the Nicholas Church suffered: its domes were lost and the building was turned into a storage facility. But now it is again an operating temple. The true dome and bell tower have not been rebuilt, but the church still looks very colorful, especially with its impressive high stone foundation and huge windows. (cherkassy.glo.ua)