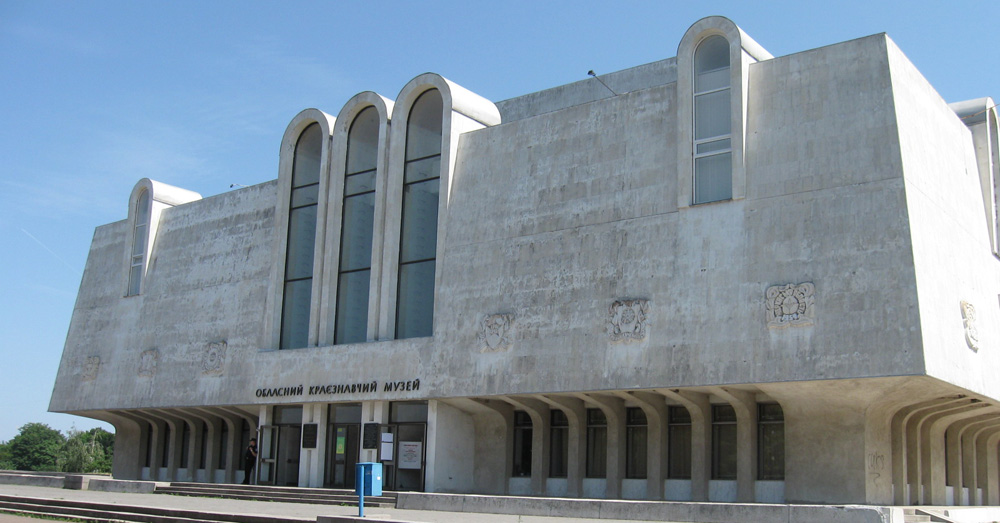 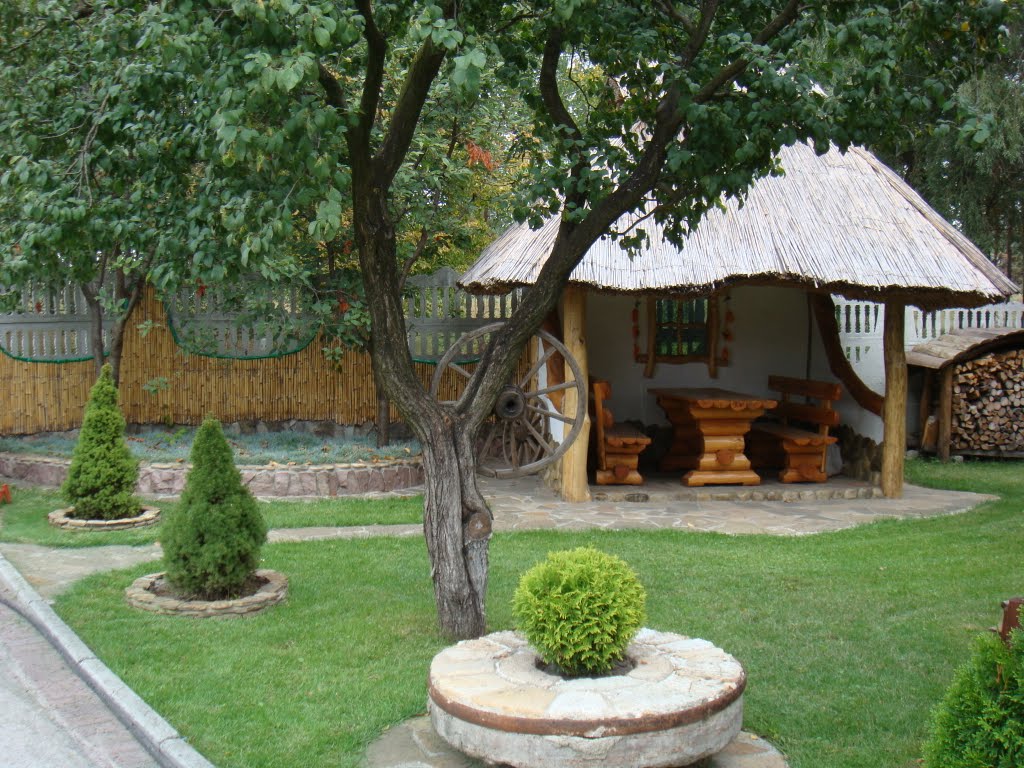 Or, as it is called ‘Alexis Park’, it was created in Ukrainian retro style, located on theo homestead of A. Chernik. Here you can see a small open-air museum: from home-hut with a roof of reeds to old cannon. Almost all the exhibits are active. You can walk through the avenue of birches towards the shore of the Dnieper ducts. You can also enjoy the sight and sounds of a mini-waterfall, have a roast barbecue on an old fashion style grill. (galleryua.com) 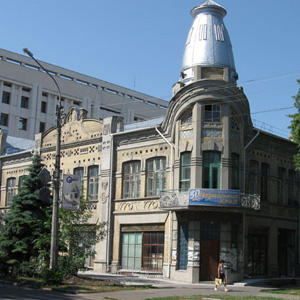 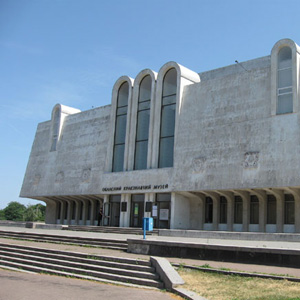 Cherkasy Regional Museum of Local Lore is the largest collection of the materials and documents of the history, ethnography and culture of Cherkasy region, its natives and personalities. Cherkasy museum of regional studies was founded in May 1918 at the initiative of the local organization 'Prosvita' (the public education) and the teacher city community as T.G. Shevchenko Historical and Pedagogical Museum. The head of the initiative group and the first director of the museum Dmytro Panasovych Bochkov was a tireless researcher of the native land history.

The exposition of the museum is located in 30 halls with the area of 2800 m. It has sections: the nature of the land, archeology, ethnography and history of the region of the 14—early 20th centuries, history of the region since 1917 till the present, and a big hall honouring the prophet of Ukraine T.G. Shevchenko. There is the number of the separate halls dedicated to the outstanding fellow-countrymen from Cherkasy or the famous persons whose activities are connected with 'the land of Shevchenko' (poet Vasyl Symonenko, botanist and selectionist Volodymyr Symyrenko, politician Vyacheslav Chornovil).

The exposition of the museum presents a wide range of the thematic sections, where about 12 thousand exhibits are harmoniously distributed in historical periodization. Stock collection of the museum at the beginning of 2003 was more than 106 thousand items of the main and scientific subsidiary funds.

The memorial plate on its facade testifies that Taras Svevchenko, during his visit in Cherkassy in 1859, lived in this building. It is house number 217 at Kreschatik Street, on the crossing with Baida Vishnevetsky Street (former Suvorovsky Street). Nowadays ‘Kobzar's Museum’ is located here. However, very few Cherkassy inhabitants know, that it is the oldest building of the city and that in due time this construction with its three storeys was the highest, it was like a skyscraper of pre-revolutionary Cherkassy.

The house was constructed in 1852 and belonged to businessmen, merchants of the first guild Tsybulsky. However, the building’s original form was one-and-a-half storeys and half wooden. In that house where T.G.Shevchenko stayed in, lived the family of his friend Efim Tsybulsky. Unfortunately, names of the architect and the engineer of restoration are unknown. The building shows architecture of neoclassicism, and the volume decision is very characteristic for angular buildings of that time. The rectangular building has two main facades which are accented by balconies. The walls of the facades are decorated very frostily. Only the top floor is decorated by a vegetative ornament from hewn brick and windows of the third floor are underlined by the vignettes executed in the same methodology. Window are folding, extended; that was a novelty in that time too. The building roof is fenced by a balustrade and looks very elegantly. (ukraine.ui.ua)

The museum was opened March 9, 1992. The exposition of the museum consists of two divisions: arts and crafts and fine arts. The museum is housed in a beautiful building in the city center.

The museum's collection has evolved over 25 years through the acquisition of works from exhibition halls of the former Soviet Union, plus purchasing works of art from prominent artists of Ukraine, folk artists and collectors, and by restoration of works from the private collections of Count Bobrinsky, princes Lopukhins and Belokopytova, that were passed to the T.G. Shevchenko historical and pedagogical museum in 1918.

The first section of the museum introduces the folk art of the Middle Dnieper. Here are displayed the wonderful examples of old Ukrainian embroidery, exquisite in color and ornamentation. Impressive silver-shimmering shirts, embroidered with white thread on white background. Evidence that the art of embroidery still lives on today are the wonderful products of professional artists.

Cherkasy has long been famous for its pottery. The exposition presents unique works of black and smoky ceramics from the pastoral pottery villages of Gromy, Grushevka and Hnilec. Also, products of the Mankovsky factory 'Kolorit' and original works of ceramic masters I.Suhogo, F.Gordovogo, M.Churukanova and M.Titarenko are displayed. Decorative painting, very common in the Cherkasy region, is represented by artists as Irina and Sofia Gumenyuk, Tamara Gordov, Valentine Kuzmenko and Katerina Kaydash-Mashkovskii.

The second section of the exhibition shows iconography from the 17th-19th century, a beautiful portrait from the 18th to early 20th century. Among the portraits, the image of abbot Melkhysedek Znachko-Yavorsky of the Motronynskyi Trinity Monastery stands out. He was one of the outstanding figures of the Orthodox Church of the 18th century; a politician, a defender of Orthodoxy on the right-bank Ukraine. (cherkassy.glo.ua) 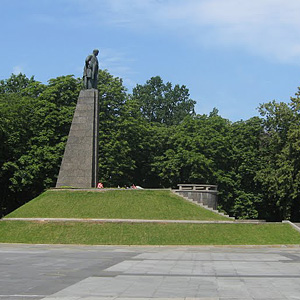 The new history of Chernetcha hill began on May 22nd, 1861, when Ukraine welcomed the freedom singer, prophet of national renaissance, genius poet and artist Taras Shevchenko. On this day his last will was fulfilled – to rest in peace on Ukrainian land. The hill was at once renamed to Tarasiv’s hill by Kaniv inhabitants.

During the summer of 1884, first public museum of Kobzar was built on Tarasiv’s Hill. Its construction was funded by the common people and it was called ‘Tarasiv’s Hornitsa’. His grave was adjusted then and a monumental iron cross-shaped memorial was erected, a project of architecture academic V. Sichugov.

On June 10 of 1918, the Council of Ministers of Ukraine declared the grave of Taras Shevchenko national property. Shevchenko’s memorial got a new look during the summer of 1939 with the establishment of magnificent bronze monument on the grave (architect E. Levinson, sculptor M. Manizer) and with the construction of the literal memorial museum (architects V. Krichevskiy and P. Kostirko). The museum harmony was finished with a granite stair complex (1977).

Nowadays, Shevchenko’s national park is a widely known educational and cultural, scientific and research, and tourist center, where people study and popularize the legacy of the Ukrainian national and world’s historical and cultural heritage. There they also study Kobzar’s work, the history of Tarasiv’s (Chernetcha) Hill and provide protection for historical monuments from prehistoric times, as well as for the natural environment. Total surface of protected area is 2500 hectares. There are 8 monuments of cultural heritage on the territory of the national park.

The museum’s collection of the National Park include more than 20,000 unique pieces: memorial itms and etchings of Taras Shevchenko, rare editions of his works, works of fine art of Ukrainian and foreign artists, masterpieces of folk fine arts, precious archived documents, movies, photographic materials, audio- and video recordings of famous bandurists and kobzars. There is a scientific library at the National Park, funds of which include 23,000 books. (museum3dtours.com) 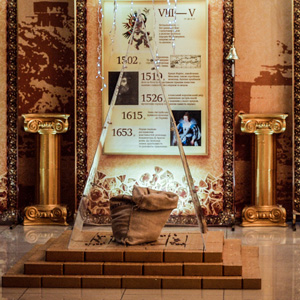 In september of 2010, the company ‘AVK; has opened the ‘Chocolate Museum’ doors. This idea was met much enthusiasm from visitors from all over the country. In this museum you will not only have nice tour and see pieces of chocolate art, but of course you will also taste the masters’ wonderful chocolate delicacies.

In the museum of Chocolate, with its 50 sweet works of art, visitors can learn the history of chocolate, methods and secrets of its manufacture and also taste the best kinds right from the chocolate fountain. The museum consists of four halls. In the first hall one can learn history of chocolate from Mayan times until present day. The second hall tells about technologies of chocolate manufacturing and represents different kinds of chocolate production. In the third hall over 50 creations of chocolate masters are displayed; flowers, fruit, cars, animals, pictures, fortresses and even a copy of the Eiffel Tower. The fourth hall is intended for tasting chocolate, right out of two chocolate fountains. Sweet masterpieces for the Museum were created by masters from all over Ukraine. 900 kilos of chocolate were used for creation of the Museum. (shokolandia.com and www.primetour.ua)