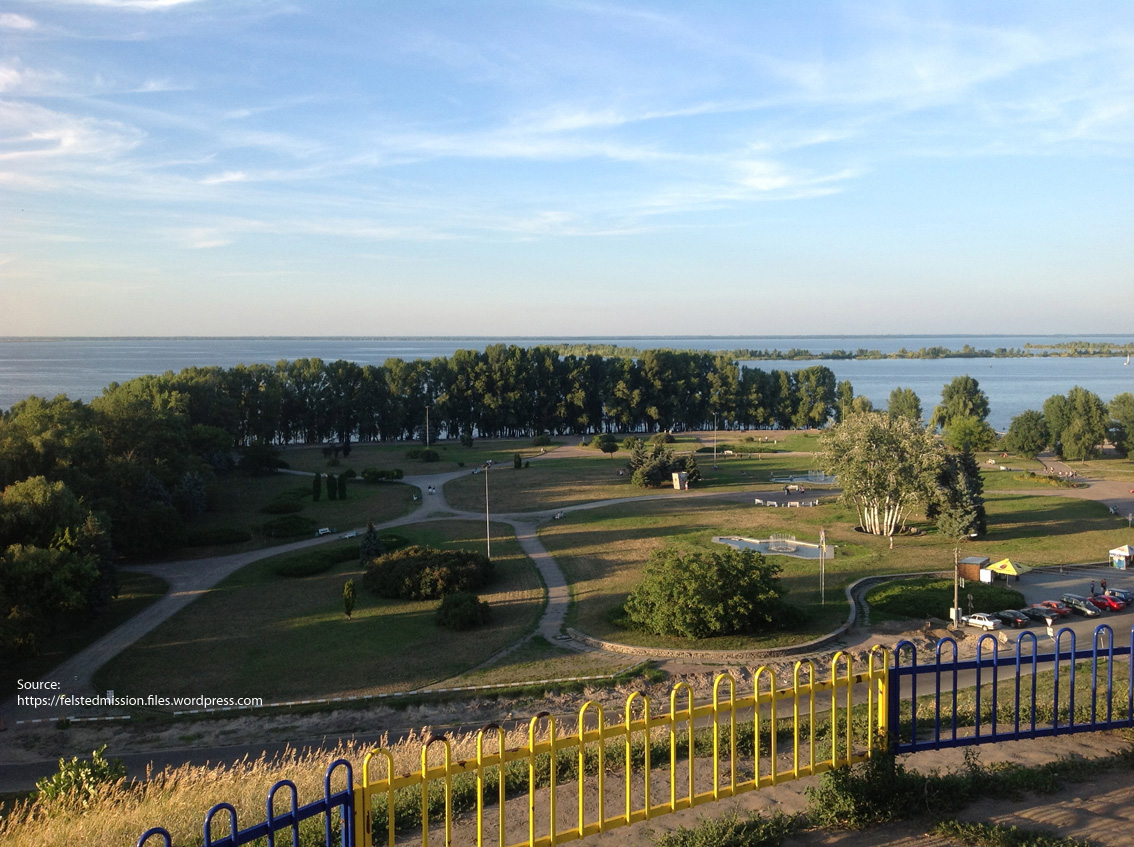 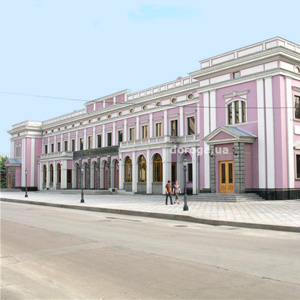 The building of the Cherkassy Regional Philharmonic is situated in the centre of Cherkassy. It was constructed in 1955 on the site of the pre-revolutionary hotel. The facade was completed in 1961. The acoustics of the Cherkassy Philharmonic Hall rank third place in Ukraine. In 1957, the famous Cherkasy State Honored Ukrainian Folk Choir was founded, that later became the winner of the Republican contest of creative teams, and of the III World Festival of Youth and Students in Moscow.(www.doroga.ua) 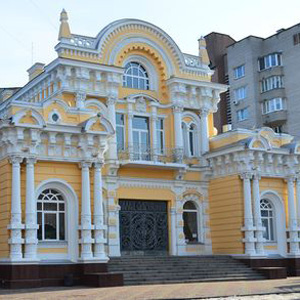 It was the most luxurious mansion ofCherkasy before the revolution. In Soviet times it was known as the 'Palace of Happiness', because it was city's registry office. The house was built by entrepreneur A. Scherbina in 1892. From 1970 untill the present day the building is used as the Wedding Palace (civil registry agency). 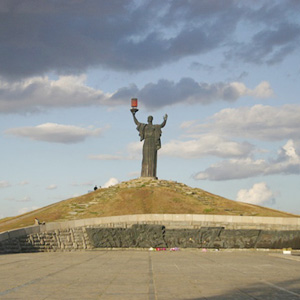 The memorial complex with a monument 'Motherland' is located at the top of the former Castle Hill. Here stood an ancient Russian fort, remains of a Cherkasy fortress and the Holy Trinity Church. In 1977 all architectural and archaeological sites were destroyed during construction of this monument. From the top of the hill you can see a beautiful panorama of the Kremenchuk Reservoir. This memorial was built in memory of the victims of the Second World War.

Fountain with light and music 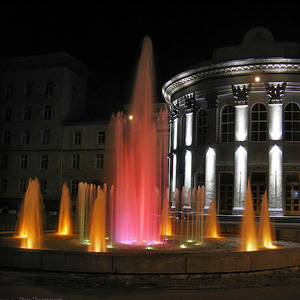 The fountain is located in the park near the regional administration. It was restored in 2008 after not working for ten years. It was reconstructed on the initiative of the Cherkassy city council and was funded by several sponsors. (goidse.be) 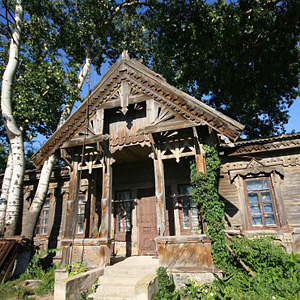 The wooden one-story house was built by the physician Kiev architect Vladimir Gorodetsky, who often visited the estate of landlords Balashov. He did different architectural orders for them. During one of his visits, Balashov asked the architect to design a complex of buildings for the village of the district hospital. Only one is preserved in its original form, decorated in Zemsky-style using colorful threads. 'House of the Doctor' - or Dom Vratcha - is located at Lenin Street 60. (cherkassy.glo.ua) 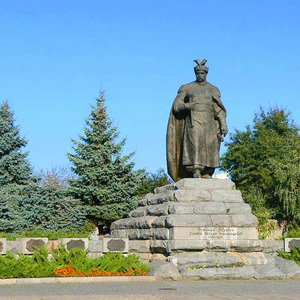 Bohdan Zynoviy Mykhailovych Khmelnytsky (1595 – 6 August 1657) was the Hetman of the Zaporozhian Host of the Crown of the Kingdom of Poland in the Polish–Lithuanian Commonwealth (now part of Ukraine). He led an uprising against the Commonwealth and its magnates (1648–1654) which resulted in the creation of a Ukrainian Cossack state. In 1654, he concluded the Treaty of Pereyaslav with the Tsardom of Russia.

Memorial to victims of fascism 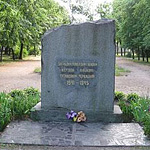 This monument stands in a park in Cherkasy , in memory of victims of fascism, Cherkassy region between 1941-1943. (www.poiradar.com)

The Monument to the Plumber 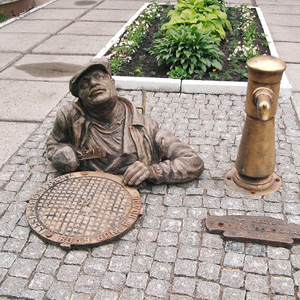 The monument was erected at the entrance to 'Vodokanal' (the water utility company) in honor of its 90th anniversary. It is the only professional occupation monument in the city. Nearby, there is a fire hydrant of the Russian Empire times. Vatutin Street, 12. (ukrainetrek.com) 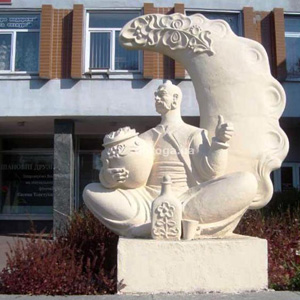 The first statue in Ukraine for ‘Vareniki’ (Ukrainian dumplings) was established in 2006 near the hotel ‘Rosava’ in Cherkassy. The sculpture is a Cossack Mamai, who is eating dumplings. Behind him stands a huge crescent-shaped dumpling. The sculptor of the monument, I. Fiser, made it celebrating one of the classic dishes of Ukrainian cuisine. The height of the ceramic statue is 2.5 m. When it was revealed to the public, a real dumpling had been prepared: a dumpling weighing a staggering 70 kg! (www.doroga.ua) 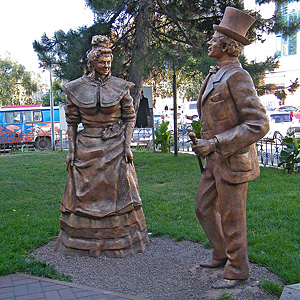 Although the play 'Chasing Two Hares' (popular Soviet-era comedy) is in no way related to Cherkasy, local entrepreneurs -on initiative of Vladimir Kolomiets - asked Alexander Gulbis to make this sculpture. Alexander watched the film over seventy times, to get the characters exactly right.
The sculptures are made of fiberglass, very strong but difficult to work with. The sculptures are painted in a bronze color. Monument is located near the 'Fashion House', whose owners ordered the sculpture. As the heroes of the play were not indifferent to fashion, this is an appropriate place. (cherkassy.glo.ua) 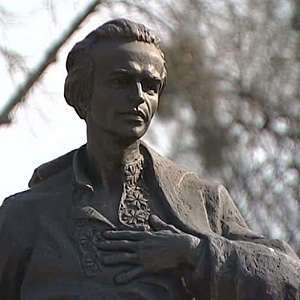 This monument was installed in a park near the city registry office in 2010. It is 2.3 m tall and completely made of bronze. Vladislav Dimyon made the sculpture. Vasyl Symonenko was born in the Poltava region, graduated from the Kiev University and then moved to Cherkassy, where he lived and worked until his death. His poetry is the hallmark of the Cherkasy region. The decision for creating this monument was made in February 1990, but due to lack of funds, its construction was delayed. After funding from the city budget and from sponsors it was possible to realize this monument. (cherkassy.glo.ua) 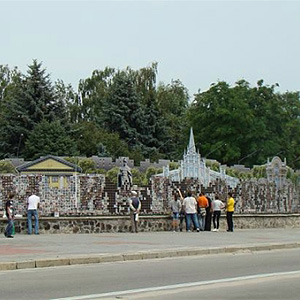 The wall of Faces or Facewall is one of the original modern attractions in the city. It is a a 35-foot wall, two and a half meters high and decorated with photos of more than 4,000 inhabitants of the city, as well as portraits of prominent people of Cherkasy region. Among them you can also find images of Taras Shevchenko, Vasyl Symonenko, ​​former mayors of the city as well as athletes.
The wall stands in the famous park 'Valley of Roses'. The opening took place in 2011, in honor of the City Day celebrations. Photos are printed on special tiles and framed in a vandal-proof frame. It is interesting that if you move away from the wall a few meters, you can see its secret: the photos compose the inscription "We - Cherkassy!". During winter, the photos are transferred to one of the museums, but with the first sings of spring the smiling faces on the photographs again light up the park. (cherkassy.glo.ua)