City
History
Museums
Churches
Sites
Parks
Theatres
Festivals
Chernigiv is one of the oldest cities in Eastern Europe and it was an important center of Southern Rus. It was first mentioned in the Rus’-Byzantine Treaty (907 AD) as Черниговъ (Chernigov), when Prince of Kiev, Oleg, claimed victory over the Greeks. Archaeological evidence shows that there was a settlement, dating back to the 7th century. This would later become Chernigiv, the capital of its principality. Legends and Polish chronicles say that the first Prince of Chernigov (allegedly) was prince Cherny. It is believed that he was buried in the tumulus known as ‘Chornaya Mogilla’ (Black Grave). This tumulus is one of the few that have been preserved in former USSR territory from pagan Rus’ times. Possibly, Chernigiv got its name in honor of this legendary first prince.

Archaeologists found artifacts from a tribe belonging to the Khazar Khaganate, the ‘Sever’ (the Northeners). They found at least four old cities, that were in fact castles or fortresses, separated from one another by deep ravines of the Boldin mountains. The Black Grave, one of the largest and earliest royal mounds in Eastern Europe, was excavated in the Chernigiv region in the 19th century.

Chernigiv quickly developed and soon became a rich and well fortified city that could compete with Kiev. This is confirmed by the Rus’-Byzantine Treaty (907 AD), referring to Chernigiv as an important and wealthy city, second after Kiev. In 1024-1036 and 1054-1239 Chernigiv was the economic and political center of the Chernigov Grand Principality, whose rulers fought for power against Kievan Grand Princes, often overthrowing them and taking the primary seat in Kiev for themselves.

Like Kiev, Chernigiv is situated on the trade route between Byzantium/Arabia and Western Europe/Scandinavia. Crafts, arts and literature developed; books about Ivan Godinovich, Ilya Muromets and Solov Rasboynik were written here. The most important work ‘Words about Igor’s campaign’ tales about Igor’s last years as prince of Chernigiv. Now he lies buried underneath the Savior Cathedral, like most princes of the Chernigiv dynasty. 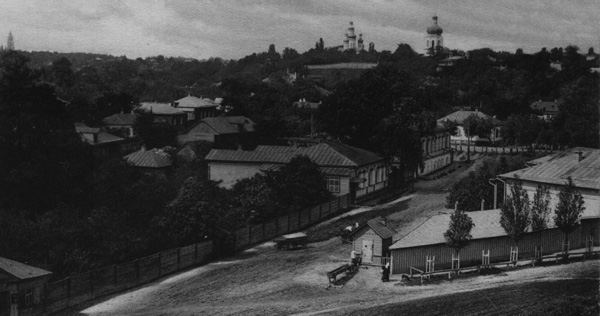 The first Chernigov prince, who was mentioned in the chronicles, was Mstyslav from Tmutarakan. He was the son of Kiev Prince Volodymyr, who adopted Christianity as state religion in Kievan Rus. Mstyslav was called by his contemporaries as ‘The Brave’ and he was considered a worthy successor of his father Volodymyr, Baptizer of Rus, and of his grandfather, the Kiev Prince Svyatoslav. In these chronicles one would fail to find similar words regarding Mstyslav’s brother Yaroslav the Wise, whose character and ambitions unleashed the first civil war in Kievan Rus.

Under Mstyslav’s rule a political and religious center developed, a ‘capital city’ called Detinets, which was located on the territory of modern day Val, a Russian fortress. They constructed reinforced walls, the prince’s palace and started building the magnificent Saviour Cathedral, that has been preserved to this day. This cathedral is as old as the St. Sophia Cathedral in Kiev.

In 1024, Mstyslav defeated the troops of his brother, Yaroslav the Wise. As a result Rus was divided into two states with the border running along the Dnieper river: Right-bank Rus with Kiev as its capital and Left-bank Rus with Chernihiv as its capital. The same year, Mstyslav laid the foundations of the Spassky (Our Savior and Transfiguration) cathedral. Nowadays, this cathedral is one of the oldest preserved Orthodox churches on the territory of Ukraine and Russian Federation.

The mysterious death of Mstyslav’s son and later his own death in 1036 enabled prince Yaroslav the Wise to get hold of all the Rus’ lands. In 1054, prince Svyatoslav, eldest son of Yaroslav, was appointed as the Duke of Chernihiv and he ruled the principality for almost 20 years. He turned Chernigov into a well-reinforced fortress and he founded the Yeletsky (Fir grove) Monastery with the grand Uspensky (Assumption) Cathedral.

In 1069, the first Russian monk Saint Anthony started the cave monastery on the Boldin Hills. The mysteries and secrets of this cave complex continue to excite many scientists. The Boldin Hills can also boast of two unique pagan tumuli. In one of them remains were found of a warrior-giant. Some researchers believe that the Russian epic warrior Ilya of Murom was buried there. One of the biggest tumulus burial sites in Eastern Europe is also located in the Boldin Hills.

Grand Duke Volodymyr Monomakh ruled Chernigiv for about fifteen years (1078-1093). Afterwards he became the Grand Duke of Kiev (1113). In 1120, Chernigiv Prince David built the Borys and Glib’s Cathedral on the site of the former pagan shrine in the modern day Val (Rampart). One more preserved church building is the The Church of St. Parasceva Pyatnitsa (Friday Church), and is as old as the monument of Ancient Rus Literature ‘The Lay of Igor’s Warfare’ (end of the 7th century). A real pearl of Chernihiv architecture. Also the Savior Cathedral and the Saint Elias Church were constructed. These majestic stone structures show the economic significance of Chernigiv and the northern lands of Ukraine. At the end of the 12th century, the city of Chernigiv covered an area of 200 hectares, including the royal center (Detinets), castle, Tretyak, suburbs and also outskirts. The Grand Principality was the largest in Kievan Rus and included not only the Severian towns, but even such remote regions as Murom, Ryazan and Tmutarakan. The golden age of Chernigiv, when the city population peaked at 25,000, lasted until 1239.

The main character and presumably the creator of ‘The Lay of Igor’s Warfare’, Prince Igor of Novgorod-Siversky, ruled in Chernigiv after his unsuccessful campaign against Polovtsian in 1185. It is believed by some researches that he was buried in Chernigiv as well.

In 1239, the city was sacked by the Tatar-Mongol hordes of Batu Khan. The city was captured, looted and burned by the army of Khan Meng. A terrible fire killed most inhabitants of Chernigiv, burned churches and buildings and destroyed many cultural valuables. The city was devastated in such a degree that it took four centuries to rebuild it to the level, which it had at the beginning of the 13th century.

In 1353, the area fell under the Grand Duchy of Lithuania. In 1408 it belonged to Moscow Rus. The city was burned again by Crimean khan Meñli I Giray in 1482 and 1497. In 1503, Moscow Rus again came into possession of the major part of Chernihiv territory. But after the people’s revolt against Moscow in 1606, the territory returned again to the Polish-Lithuanian Commonwealth. The city was granted Magdeburg rights in 1623. In 1635, it became the seat of Chernigiv Voivodeship. The area’s importance increased again in the middle of the 17th century during and after the Khmelnytsky Uprising. During this War for Liberation (1648), Chernigiv colonel Martyn Nebaba was one of the closest companion-in-arms of Cossack Hetman Bogdan Khmelnitsky. In 1696, it was the Chernihiv Cossack regiment commanded by Assigned Hetman Jakob Lyzogub that first burst into the Turkish fortress of Azov. That event was commemorated by erecting the Yekateryninska (St. Catherine) Church. This church is a beautiful example of Ukrainian Baroque style. In the Hetman State, Chernigiv was the city of deployment of Chernigiv Cossack regiment (both a military and territorial unit of the time).

In 1679, Archbishop Lazar Baranovych laid the foundations of The Cathedral of Holy Trinity on the Boldin Hills. It was the first monumental construction on the Left-Bank of Ukraine since four centuries.

Chernigiv colonels and Cossack officers were not only brave soldiers and commanders, but also wise statesmen. They cared about the restoration of destroyed cultural monuments, temples, monasteries and they built new cathedrals. At the end of the 17th century Jacob Lizogub financed the construction of a chancery building. Now, it is one of the few examples of residential architecture of the Cossacks.
In 1700, Ivan Mazepa began constructing the Collegium; the first secondary educational institution on the left-bank of Ukraine, which has played a significant role in the spiritual life of the region.
Colonel and acting hetman Pavl Polubotko, living and working in Chernigiv, was defender of rights and interests of the Ukrainian people. He bravely died in the dungeons of the Peter and Paul Fortress in St. Petersburg. One of the main streets in the centre of Chernigiv is named after him.

One more Chernigiv Cossack Colonel is well known in history. It is Pavlo Polubotok. He participated in the battle of Poltava, fighting on Moscow’s side, when on the 7th of August 1709 Peter I defeated the king of Sweden, Charles XII. Peter I relied heavily on Pavlo Polubotok. Nevertheless, he put Polubotok in prison later on and was cursed by the Chernihiv Colonel. The curse apparently came true, since Peter the Great died shortly after.

Under the 1667 Treaty of Andrusovo the area was tributary to the Tsardom of Russia, with Chernigiv remaining an important center of the autonomous Cossack Hetmanate. With the abolishment of the Hetmanate, the city became an ordinary administrative center of the Russian Empire and a capital of local administrative units. The area in general was ruled by the Governor-General appointed from Saint Petersburg, the imperial capital, and Chernigiv was the capital of the local ‘namestnichestvo’ (province) from 1782, of Malorosiyskaya or Little Russian from 1797 and of the Chernigov Governorate from 1808.

According to the census of 1897 in Chernigiv were about 11,000 Jews in a total population of 27,006. The chief occupations of the Jews were industrial and commercial. In the neighborhood many tobacco-plantations and fruit-gardens were owned by Jews. There were in Chernigiv 1,321 Jewish craftsmen, but the demand for artisan labor was limited to the town.

But Chernigiv is not only known for its history and numerous landmarks. It should be noted that despite the terrible destructions of bombardments during World War II, about quarter of all Ancient Rus monuments of pre-Mongolian period has been preserved. Talented fabulist Leonid Glibov lived and was buried in Chernihiv, as well as Ukrainian folklorist and ethnographer Afanasiy Markovych, who was married to the equally renowned novelist Marko Vovchok (Mariya Vilinska). The Kotsubynskies are also buried in Chernigov. Mikhail Kotsubynsky was an outstanding Ukrainian writer, a public figure and the founder of modern Ukrainian literature.

Actually, Chernigiv has an inexplicable aura. Even so, despite being an unique historic city, it has always remained in the shadows. But now the city is ready to be discovered by lovers of the unique, the interesting and the mysterious.