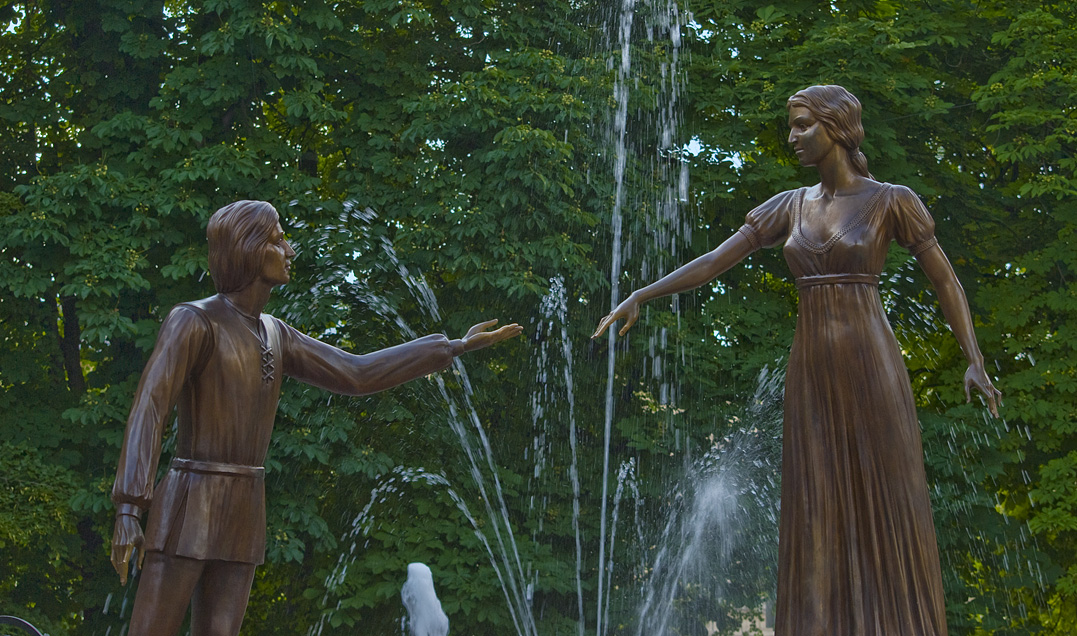 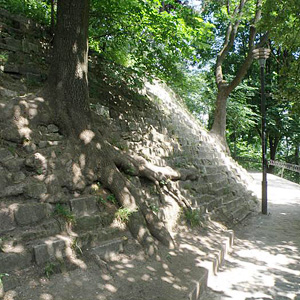 The High Castle Park: an old shady park on the hill towering above the city, ruins of an old castle, the viewing platform, and breathtaking sceneries. The highest hill in Lviv (413 meters above the sea level and approximately 130 meters above the level of suburbs) was built artificially in the end of the 19th century in honour of the Union of Lublin. And so Lviv obtained a viewing platform the likes of which can not be found elsewhere in Europe. The views from this platform will not leave anyone who dared go up there indifferent.

The stone lion which used to stand near the City Hall is now on guard at the foot of the artificial barrow. This lion is more than 400 years old. A fragment of the wall of the castle, that stood on the hill since the 14th century, can be found nearby.

A huge alley of age-old chestnut trees runs along the lower terrace of the High Castle Park. A memorial stone has been placed here in honour of the victory of Polish King Jan III Sobieski over the Turkish army in 1675 on Lysenytsky Fields, which can be seen from this place.

The chestnut alley ends with a small gardener’s house (1892) surrounded by many exotic plants. An artificial cave with the inscription reading “August 15, 1841” was placed here as a decoration for the park in mid-19th century. The cave’s entrance is guarded by two 17th-century stone lions from the old City Hall. They hold shields with the coats of arms of Lviv patrician families. This cave was once called 'The Suicidal Cave', because people in love but unable to be together, because of circumstances, committed suicide here.

The High Castle Park is also unique due to its location on a high wooded mountain right in the centre of the large city, and so there’s only a 10-15-minute walk from the noisy streets to the coolness and cosiness of age-old trees where nothing reminds of the bustling urban life. 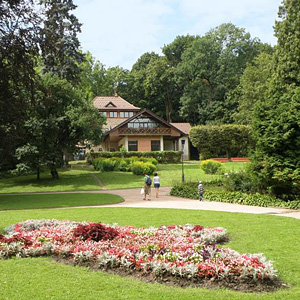 Stryisky Park (Parkova and Stryiska Streets) is the largest and most beautiful park in the city, perfect for taking a relaxing walk. In this park you all find a wonderful pond with swans, a glass greenhouse with tropical plants, and artificial castle ruins.

We enter from Parkova Street, walk through the graceful and exquisite Corinthian archway and find ourselves in what was considered one of the most beautiful parks in Europe, at the beginning of the 20th century. The large glass greenhouse from the late 19th century with tropical plants stands next to the pond with swans. About 260 species of rare decorative plants grow around it and along the main alley. One of them, an exotic tree with fan-like leaves, existed during the age of the dinosaurs. Next to the decorative cascade the tulip tree grows, which comes from North America.

In the centre of the lower parterre is the monument to Polish national hero Jan Kilinski (1894). Deeper inside the alley you will find artificial castle ruins, which were erected in the late 19th century.

Some buildings constructed for the Territorial Exhibition of 1984, still remain in the upper part of the park. Among them is the former Palace of Arts designed by leading architects of Lviv. Especially interesting is the unique bas-relief of the totalitarian era (1955), with ancient Cupids and an industrial urban landscape as well as remains of statues in Socialist Realism style along the main alley of the park’s upper part. source: http://lviv.travel/em> 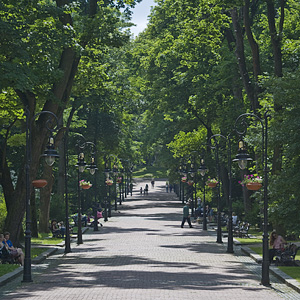 Ivan Franko Park (opposite of the university building) is already four hundred years old. It is the oldest park in Lviv and Ukraine, and one of the oldest municipal parks in Europe. Three colossal oaks in the upper part of the park are probably the oldest trees in the city, aging over 300 years.

Four hundred years ago this place was a cornfield, but later this land became private property. In the end of the 16th century a wealthy citizen of Lviv, Szolc-Wolfowicz, founded the park here and spent 1600 zloty to make it more beautiful. Later, he married off his daughter to the ambassador of the Venetian Republic in Lviv, Antonio Massari, and handed the park over to his son-in-law. Massari, in turn, rearranged the park in Italian style.

In the early 19th century, a new owner by the name of Gecht redeveloped the park for the entertainment of the people. A Dorian rotunda has remained in the park’s lower part from that time. In 1855, the park became the property of the city once again, thus becoming one of the oldest municipal parks in Europe. A well-known Lviv gardener, called Bauer, started to make it more and more beautiful. He rearranged the park in the English style. It was at that time – a century and a half ago – that almost all old trees were cut down, and the ones which we admire today were planted. There are about fifty species of them: oaks, hornbeams, limes and fir trees. Some exotic and rare plants can also be found here. At the end of the main alley you can see a large cast-iron vase with bas-reliefs (1838) which, according to the free interpretation of Danish sculptor Thorvaldsen, depicts 'The Flow of Human Life'. (source: http://lviv.travel)

In the western part of the city lies the Lychakovsky Park, that was layed out at the end of the 19th century. The park is spread over an area of 29 hectares and is famous for its rare trees, like black pine, 'Svechechny' chestnut and several species of birch. The park is a monument commemorating the national hero of Poland, Bartosz Glavatskih, and it is a monument to the victims of the wars of the last century. The park is notable for the famous Lviv Botanical Garden, founded almost a century ago, and since then became more and more famous in Europe. 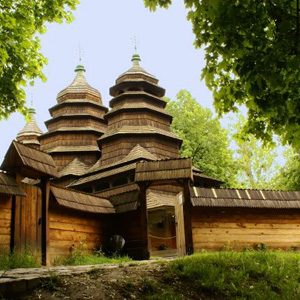 Lviv Museum of Folk Architecture and Rural Life is an open-air museum containing over 120 monuments of folk architecture, including chapels, belfries and six wooden churches. The park-museum is located on 50-hectare of land in Shevchenkivsky Hay (Shevchenko Park). Unbelievably beautiful wooden houses and churches of past ages create a genuine atmosphere of Ukrainian villages from different regions of the country; Boykos, Lemkos, Hutsuls, as well as Bukovyna and the Transcarpathian Region. In dwelling and utility houses you will find items of everyday life and farm tools.

The oldest monument in the open-air museum is a house from the Carpathian village of Lybokhora, dating back to 1749. The exposition includes wooden churches from the village of Kryvka (1763) of Turka District and the village of Tysovets (1863) of Skole District, remarkable for their unique shape. The church from Kryvka is a folk architecture masterpiece of European importance.

Folklore-ethnographic ensembles stage their performances on the museum's territory. The annual folklore festival called 'From the Folk Source' (Z Narodnoyi Krynytsi) enjoys great popularity among the visitors. Liturgies are performed at churches and especially impressive are the divine services at the Lord's Wisdom Church (the church from the village of Kryvka) held at Christmas and Easter.

The task of the museum is to collect, study and widely display typical features of rural architecture of the Western Ukraine. It shows and explains the life and traditions of various strata of the Ukrainian population, from the end of the 18th century to the beginning of the 20th century.

The Museum is divided into 8 exposition areas: 'Boikivshchyna', 'Lemkivshchyna', 'Gutsulshchyna', 'Bukovyna', 'Podillya', 'Polissya', 'Lvivshchyna' and 'Volyn', which represent the ethnographical and historical zones of Western Ukraine.