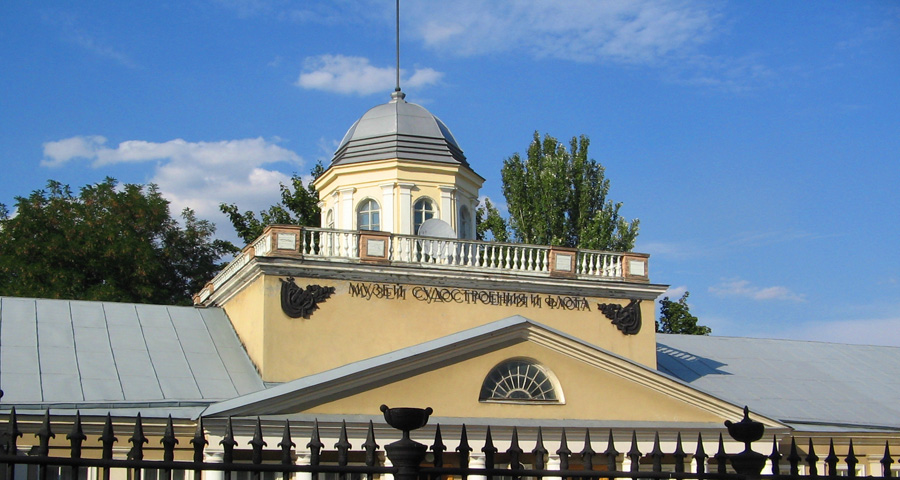 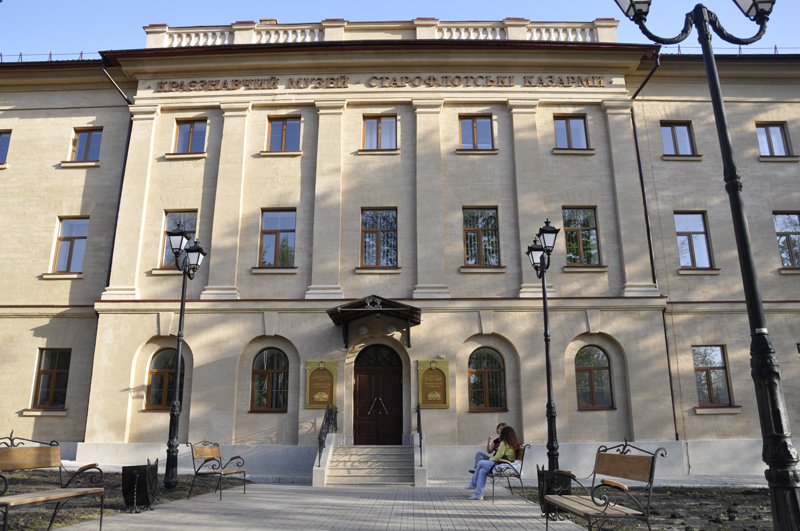 A complex of buildings of the Admiralty, built in the middle of the 19th century for the Navy Department. Architect K. Ackoyd built the barracks in 1850 in the classical style. The premises was built to accommodate sailors and naval crews. Each of the three 'Staroflotsky' barracks housed between 1,200 and 2,000 people. In 1863, the complex was transferred to the Alexander gymnasium, which was housed there before the revolution. After World War II, in the western building Civil Engineering was housed and the other two were taken over by the military. In 2012, the territory was turned into a museum. The main building holds the Nicholas Regional Museum, before it was located on the territory of the St. Joseph church. The museum was founded in 1913 in the Cabinet of Curiosities at the headquarters of the Black Sea Fleet, where various finds from the Black Sea region had been collected. They formed the basis of the collection, which now has grown to more than 160 thousand pieces. The exhibition, in particular, shows objects found during archaeological research of Olvia (ancient Greek settlement), tools of Kievan Rus and Cossack guns. (www.doroga.ua) 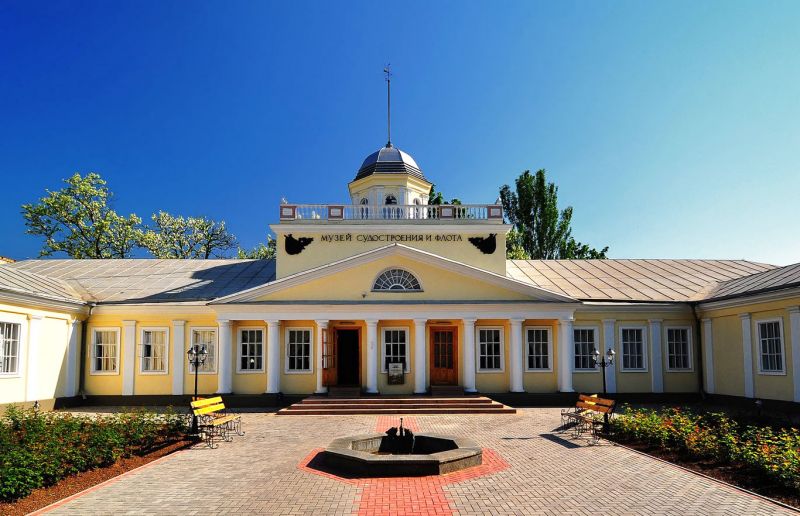 The only fleet and shipbuilding museum in Ukraine was opened in Nikolaev in 1978. The ancient building, housing the museum, is a historical and architectural monument from the late 18th - early 19th century. The exhibits displayed in the twelve museum halls count up to about 3000 items. Exhibits in the first hall are from the times of Kievan Rus and tell about the beginning of navigation on the Dnieper river, the Southern Bug and on the Black and Mediterranean seas. There are drawings of ancient Greek ships, illustrations to the 'History of Herodotus' by V. Bahtova, archaeological finds from ancient Olvia and fragments of stone anchors.

Model ships and boats show the evolution of shipbuilding, clearly revealing how, step by step, ship builders were designing ships through the ages, trying to build the perfect ship, from boats made of a log to aircraft carriers and missile cruisers. Of particular interest are exhibits about the fleet of the Zaporozhy Cossacks and their struggle to gain access to the Black Sea and the consolidation of its banks.
Cossack boating is shown on paintings of A. Antoniuk, laureate of the State Prize of Ukraine 'Taras Shevchenko'. A large part of the museum is devoted to the activities of the Nikolaev shipyards, since they were constructed in 1788, the Ingul shipyard. Thanks to the ships Nikolaev appeared on the European map, named in honor of St. Nicholas, patron saint of sailors.

The crown of the collection is the diorama 'Building ships at Nikolaev Admiralty in the first quarter of the XIX century' by the artist and Shevchenko Prize winner V. Semernev. In one of the displays lie collected artifacts of the crew of the 20-gun brig the ’Mercury', who were awarded with the St. George flag for their heroic actions during the battles of the Russian-Turkish War (1828-1829). Here is also a unique item: the ???? board of the three-masted warship 'Memory of Mercury', built in Nikolaev in 1865. (mydim.ua) 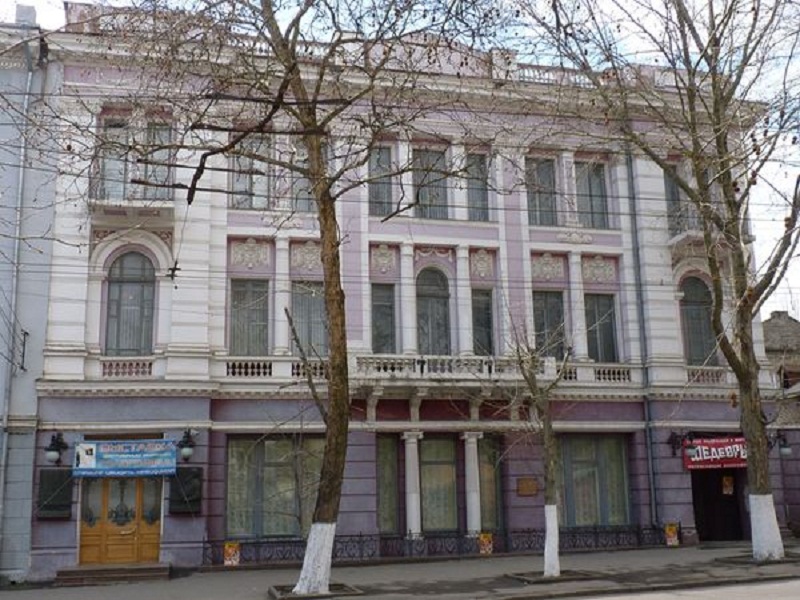 The Vereshagin Regional Art Museum has more than nine thousand works of art. The collection totaled 148 paintings of battle scenes by prominent artist Vereshagin, on whose initiative the Society of Fine Arts was founded in Nikolaev. The most striking piece of his works reflects the evolution of fighting over different wars, but the most popular is the painting 'The Apotheosis of War'; Vereshagin’s protest against all wars. The centerpiece of the exhibition hall is 'Himalayan Trilogy' (1880s). On the canvas 'The Forgotten Soldier' the artist depicts murdered and forgotten British infantry in the mountains. Three paintings from the widely known serie 'Letter to Mother' (1901) hang in the museum. Also the exhibition displays the artist's personal belongings and captures the atmosphere of his studio. Apart from Vereshagin’s paintings also works by Tropinin, Venetsianov, Bryullov, Serov and others are shown in the museum. (www.doroga.ua) 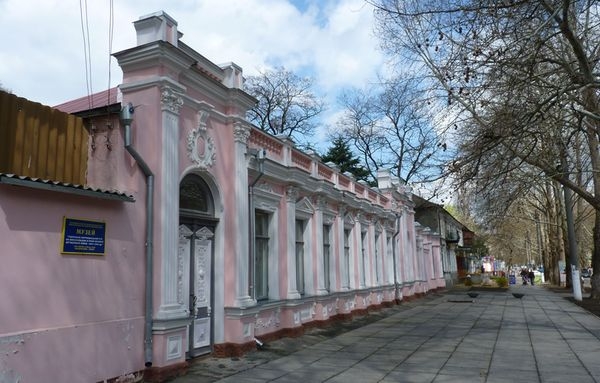 Museum of underground-partisan movement in Nikolaev was opened in 1975 in an old mansion, that belonged to a German family at the end of the 19th century. In 1941-43, V. Lyagin, the leader of the Nikolaev resistance lived here. The museum has a rich collection of documents, photographs, objects telling about the struggle of the inhabitants of Nikolaev against the German occupiers. On display are bogus medical certificates, permits, passports, copies of German press made by the underground to rescue youth from deportation to Germany and to get prisoners out of concentration camps. In the center of the hall a collection of small arms is exhibited, as well as scale models of military equipment. (www.doroga.ua)

It was founded in 1803. The opening of the museum is connected with the opening of the Cabinet of Curiosities. The chief commander of the Black Sea fleet and ports of the Marquis de Traverse ordered to found the museum, because of the need for storing archeological finds from Olvia. The search began in September 1792, as M.L. Faleev sent a group of sailors to Olvia to search for antiquities.

Until 1806 it was the only museum, where all the archaeological finds of New Russia were brought. In 1838, the Admiralty had a special exhibits hall built. In the middle of the 19th century, many of the exhibits formed the basis for opening museums in Odessa, Kerch, Kherson and other cities.
In 1856, after the Russian Empire’s defeat in the Crimean War, conditions of the peace treaty stated that naval establishments in Nikolaev had to be significantly reduced. With this the Cabinet of Curiosities was closed and the collections no longer got the necessary attention. They were divided among archives of various agencies.

On December 15 of 1913, the Mykolayiv City Council decided to form a group of amateur ethnographers (led by S.I. Gaiduchenko). Based on the continuous supply of finds the Natural History Museum was founded. It was set in the private home of I. Zaslavsky, located on the corner of Bolshaya and Malaya Morskaya. The collection of E.P. Frantseva, who over 40 years collected items in the field of zoology, botany and mineralogy, formed the basis of the collection. S.I. Gaiduckenko was appointed as the first director of the museum. The museum was enriched considerably by the finds in Olvia and items from private collections.

In 1920, the museum was renamed to 'historical and archaeological museum'. From 1929 to 1936, it was located in the houses of the 'Hauptwacht' and of the Cathedral of the Admiralty. Then, it was moved to house number 1 on Engeneering Street. Before the Second World War, the museum located at Dekabristov Street 32.
During the occupation from 1941 to 1944, the museum was almost completely destroyed. Nevertheless, the museum functioned during the occupation - even an underground anti-fascist group operated from the museum. In 1950, the museum added a variety of rare exhibits, fully restored and celebrated its opening, already as Regional Museum.

Since WWII up to 2012, the museum was pushing against the walls of a small room, that belongs to the Roman Catholic church of St. Joseph. Therefore, only two exhibition halls are working. The exhibits were kept in extremely difficult conditions - 400 units per 1 m ². Since 2012, the museum is located in the "Old naval barracks". (www.wikiwand.com/ru)