Archeological finds date back to the neolithic age. Cultures have been found in Tripolskaya (Ukraine) and Cucuteni (Romania). These existed from approximately 4,500 until 3,000 BC. These peoples lived mostly on the shores of the big rivers, of the Black Sea and of the Sea of Azov. Also they inhabited the Crimea. Where these cultures come from is yet unknown. It is assumed they were Indo-European.

The Trypillya culture is considered to be one of the most ancient agricultural cultures. Except extensive agriculture (which was considered to be a technology breakthrough at that time (about 5000 BC)) its achievement and outstanding feature included very developed ceramics craftsmanship. The area of the Trypillya proto-cities sometimes measured 250 square kilometers (one third bigger than Washington city). The Trypillya culture not only had an impact on Eastern Europe, but it also influenced Cretan, Mycenaean and Aegean cultures, and Ancient Greece too. That is why a monument was built in the city of Rzhischev. The monument has a form of binoculars; a typical shape for Trypillya ceramics. (ukraine-for-business.com)

Named after the island 'Seredni Stih' in the city of Zaporizhya, the Sredny-Stog culture lived in the eastern part of current Ukraine. Excavations show that the horse had a predominant role in this culture and evidence suggests that these people domesticated the horse 3,000 years earlier than was first thought by historians. Horse teeth have been found with wear as a result of a horse bit. The Sredny-Stog people were farmers: agriculture and live stock, where of course the horse was very important as well.

The Yamna culture took the place of the Sredny-Stogs. The Yamna culture, named after the Russian word 'yama' meaning 'pit', is also called the 'pit-digging culture'. This pit-digging refers to the so called 'kurgans' or burial mounds, wherein they buried their dead. The bodies were placed on their backs, with their knees bent. Other graves were also found in these kurgans, which suggests that the kurgans were family graves. Animal sacrifices were done during the funerals, as was accustomed in proto-Indo European cultures.

The Yamna people were mainly a nomadic people, but they also did agriculture. Fortresses have also been found, built on hills, which implies permanent residence in settlements.

It is assumed that the Yamna culture does not only originate from the Sredny-Stog culture, but also from the Khvalynsk culture. This culture inhabited the middle reaches of the Wolga river in current day Russia, and found its origins in the Samara culture.

This culture was contemporary with the Yamna culture, but found itself on the north's shores of the Sea of Azov, on the banks of the Dnieper river and on the Crimea. Originating from the Caucasus, crossing the Street of Kerch into the Crimea, this culture spread out and settled in these regions.

The Kemi Oba culture buried their deceased in burial mounds, just like the Yamna, but these graves were more complex. The walls of these rectangular rooms were finished with wood or stone and painted. The floor was covered with gravel, shells or lime. The body was placed on its side with his legs pulled up towards his chest. Surrounding the body were object made of stone, bone and metal. De chamber was then covered with stone slabs - or with wood - and the cracks were sealed with clay. After this proces a mound was raised on top of the grave and was also covered with stone.

Tumuli of important people were encircled by a circular rampart, by covering stones with soil. On top of the mound a 'menhir' (a tall stone) was placed, out of which the shape of a man was sculpted. At the bottom of this stone images, concerning the person buried, were carved: people, animals and tools.

Following the Yamna culture, the Catacomb culture existed during the Brons Age, from approximately 2,800 until 2,200 BC. This culture is more of an archeological collection of related cultures. They occupied themselves with cattle breeding and metal works, but also some agriculture, for instance the growing of grain. Because of the name of this culture, their burial rituals are quite clear. There is not much difference with the habits of the Yamna culture, except at the entrance there was a cavity, a catacomb. Another difference is the use of a death mask made of clay - probably only when the deceased was very important, similar to what the Tashtyk culture did in South-Siberia. 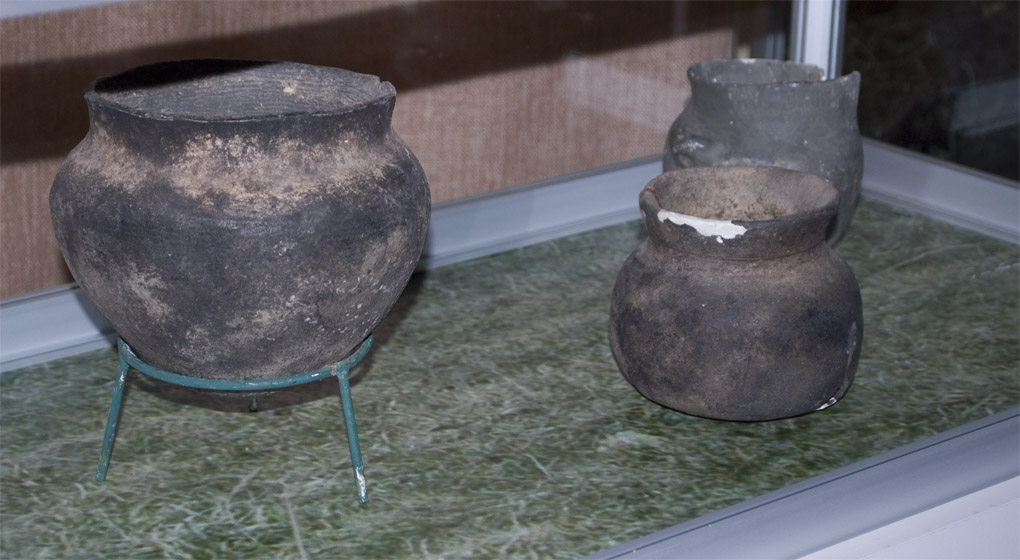 The Poltavka culture existed in the same period as the Catacomb culture; 2,700 until 2,100 BC. they were located more to the east. This culture also had the Yamna culture as a predecessor. The only differences with the Yamna are in pottery and use of metal objects.

From 2,100 - aprrox. 1,800 BC the Sintashta culture existed, rooted in the Poltavka culture and also related to the Yamna. Concerning technology and warfare the Sintashta are a important culture. The oldest discovered chariots were found in Sintashta graves. Very unusual for a people of the steppes is intensive copper mining and working. Their economy was based on the working on and exporting of copper, that took place on an industrial scale. During all Sintashta-excavations melting ovens were found. Copper was exported to cities in Central-Asia and so the first trade route between the steppes and the city states and realms in Mesopotamia came to be.

After previously mentioned cultures the Srubna culture appeared and took its place in history around 1,600 until 1,200 BC. The Andronovo culture could be found to the east during that period. De name Srubna comes from the Russian word 'srub', which means 'wooden framework'. This because of the way they built their graves. The Srubna were mostly agricultural people: mixed farming and cattle breeding. Some believe that the Cimmerians descend from the Srubna.

From the Brons Age to the Iron Age. These pre-Scytian cultures existed from 900 until 650 BC and had obvious connections with cultures in Central-Asia and South-Siberia. During the ninth century BC a nomadic migration took place from the eastern steppes towards the lands north of the Black Sea. Evidence from the graves tell us that horse riding was very important in their cultures. these peoples had a nomadic existence and bred cattle. Archeologists connect these cultures with the Cimmerians.

From Anatolic, Thracian or Iranian lineage the Cimmerians were early-European horsemen. It is assumed their ruling elite were Iranians. They lived in the south of modern day Ukraine and Russia. Through the Crimea they moved across the Caucasus southwards, where they threatened Little-Asia and Assyria. Around 655 BC they defeated the Phrygian Empire and king Gyges of Lydia. A few decennia later they themselves were defeated by king Alyattes II. What happened to them afterwards is unknown, though there are several theories about that.

Around 800 BC the Scythes, Iranian horsemen, came from the east and settled in the area north of the Black Sea until 300 BC. The Scythes contain a collection of peoples occupying the lands from Karpathia to Mongolia. Though there are differences they all are part of the Scytho-Siberian culture. Mostly there is no discrimination, but Greek historians referred to those living north of the Black Sea and in the Caucasus as 'Pontic' or 'Classic' Scythes.

A number of pre-Slavic tribes living at the Black Sea were subjected to the Scythes. Herodotus called these tribes the Budini and the Neuri, who traded with Greek colonies on the Crimea. De Budini traded cattle, hides and fur, wood, bee wax and honey and grain. De Neuri traded textiles, olive oil and wine.

Kindred to the Scythes were the Sarmatians, an Iranian nomadic people, who drove the Scythes away or assimilated them into their culture. This happened around 300 BC. The Scythes ceased to exist as a people around 100 BC. Later, Roman historians would speak of Scythes, but these were actually the Budini and the Neuri. Around that time the Roman Empire took the Greek colonies on the Crimea and around the year 0 the 'Empire of the Bosporus' came to be, including the Crimea and the area around the Sea of Azov. The Sarmatians traded with the Romans and with the Greek. Some Sarmatian tribes moved westwards, among them the Yazyg tribe, towards the Hungarian plains. Later, the Yazyg tribe - together with the German Marcomanni and the Quadi - would fight against the Roman forces during Marcus Aurelius 's rule (165 until 180 AD).

De Sarmatians between the rivers Dniester and Don ruled the ancestors of the Slavs, who were living north of the Sarmatians. This would explain the number of Iranian words in Slavic languages. These Sarmatians were defeated by the Goths, who came from what later would be the Pommerelles, West-Prussia and Danzig. The Sarmatians were subjected to Ostrogothic (or Eastern-Gotic) rulers.

When the Huns destroyed the Ostrogothic empire the Sarmatians became théir vassals. A Sarmatian tribe, the Alans, moved westwards en reached the northwest of Spain, where they were subjected by the West-Goths, or Visigoths. It is suspected that other Sarmatian tribes dissolved into Turkish peoples.